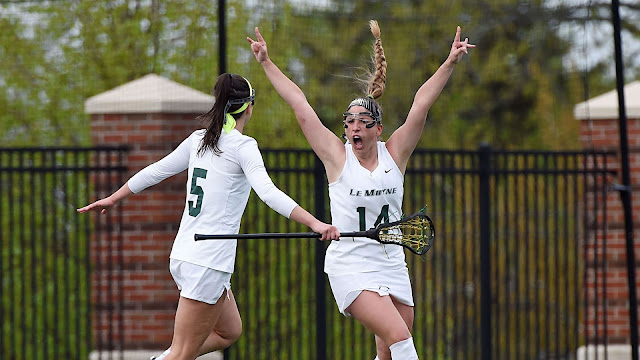 Fazio, the Brine/US Lacrosse Division II Preseason Player of the Year, tallied her nine points on six goals and three assists. The nine points and six goals are both the most by a Dolphin in the team's season opener in the program's history.

The Dolphins opened defense of last year's national championship by scoring the first three goals of the game. Senior midfielder Monica Sanna (Pittsford, N.Y./Pittsford) started the scoring just 50 seconds into the game. Following a yellow card on the Greyhounds, junior midfielder Nicole Delany (Camillus, N.Y./West Genesee) finished off a feed from Fazio with 26:16 left in the half. Fazio took advantage of another UIndy yellow card to score her first goal of the season with 24:05 to go.

The Greyhounds got on the scoreboard at the 22:57 mark as Julia O'Brien scored off a pass from Grace Gunneson.

Le Moyne answered with the next seven goals over 9:58. Fazio started the streak at the 18:23 mark after collecting a pass from sophomore attacker Erin McMullen (Syracuse, N.Y./Westhill). She then fed Sanna for her second goal of the contest just 49 seconds later. Following three and one-half minutes of scoreless play, junior attacker Sidney Hall (Adams Center, N.Y./South Jefferson) posted her first goal of the day with 14:05 remaining in the half. Delany netted her second goal of the game with 12:13 to go off a feed from Hall, who then set up McMullen with 10:32 to play in the stanza. Hall found McMullen again 54 seconds later to put the Dolphins up 9-1. Delany capped the outburst and got the Dolphins into double digits with 8:25 to go after collecting a pass from Fazio, who moved past Amanda Keegan '07 for sixth on the program's career assists chart with her 68th.

In a player-down situation, Peyton Romig ended Le Moyne's run with her fifth goal of the season with 7:20 left in the half.

Fazio tallied the final goal of the half with 2:45 left after taking a feed from sophomore midfielder Lauren Ferris (Syracuse, N.Y./West Genesee).

As they did in the first half, the Dolphins opened the second half with the first three goals. Fazio gave her team a double-figure lead with 28:28 left in the game after receiving a pass from Hall. Fazio recorded her fifth goal of the contest with 25:26 left off a feed from McMullen. Hall put the Dolphins in front 14-2 with an unassisted goal with 21:29 to play.

Le Moyne scored the last three goals to deliver the game's final margin. Delany scored from in front of the goal with 10:43 left off a transition pass from junior defender Olivia McEntee (Cazenovia, N.Y./Cazenovia). Delany netted her fifth goal of the game with 8:48 to play off a feed from sophomore attacker Brittney Pollack (Fairport, N.Y./Fairport). Fazio ended the game's scoring with her sixth tally of the game with 2:01 left after collecting a feed from Sanna. With the goal, Fazio moved past Erica Geremia '16 for fourth on the program's all-time points list with her 231st.

Junior goalkeeper Hannah George (Johnson City, N.Y./Maine-Endwell) registered six saves, including three in each half, to earn her 42nd career victory. Cassidy King posted three saves in the loss for the Greyhounds.