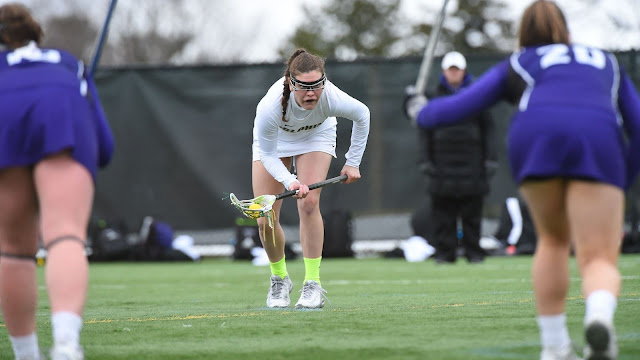 The Golden Rams, who won their first 19 games last year before falling in the Atlantic Region final, scored the game's first three goals and four of the first five. Sami Barnett started the scoring off a free-position shot 2:11 into the game. Maggie Stella followed with a free-position goal of her own 1:28 later. Stella scored again 65 seconds later to force a Le Moyne timeout.

Senior midfielder Monica Sanna (Pittsford, N.Y./Pittsford) got the Dolphins on the scoreboard with 22:23 left in the half with a shot from the right side.

The Golden Rams got the goal back with 19:38 left as Tara Morrissey scored off a pass from Emily Schulze in an extra-player situation.

The Dolphins countered with five straight goals to close out the half. Junior attacker Sidney Hall (Adams Center, N.Y./South Jefferson) ignited the run with a free-position goal with 15:10 to go. She scored again 1:57 later to get the Dolphins within 4-3. Sanna knotted the score at four with 8:37 to go after collecting a pass from Hall. Sanna put the Dolphins in front for the first time with 2:40 remaining in the half off a feed from sophomore attack Erin McMullen (Syracuse, N.Y./Westhill), who followed 49 seconds later with her third goal of the season.

Hall pushed Le Moyne's run to six with a free-position tally with 28:25 remaining in the game for her fifth goal of the season.

West Chester answered with three straight goals to even the score at seven. Barnett started the comeback with a free-position goal with 25:01 to go. Devon Mela followed with her first goal of the season with 13:44 to play. Ryan McKinney tied the score at seven with 11:54 left off a feed from Morrissey.

The Golden Rams scored the next two goals to regain the lead. Stella tied the score at eight with an unassisted tally with 5:41 to go. After Julianne Clemens made a save, Barnett recorded her third goal of the day with 2:53 left off a free-position shot.

After the Dolphins regained control of the ball off another save by Clemens, Le Moyne tied the score at nine with 1:24 to play. Off a feed from the left side by Fazio, junior midfielder Nicole Delany (Camillus, N.Y./West Genesee) tallied her sixth goal of the season.

The Dolphins won the ensuing draw and put a shot on goal, but Clemens made a save with seven seconds left.

Sanna won the opening draw of overtime and Fazio was fouled with 4:49 to go to earn a free-position. She buried the attempt for her eighth goal of the season to give the Dolphins the win.

Junior goalkeeper Hannah George (Johnson City, N.Y./Maine-Endwell) made seven saves in the victory for the Dolphins Clemens finished the contest with 14 saves, including seven in each half.

Le Moyne (2-0) returns to action on Saturday at sixth-ranked LIU Post at 11:00 a.m.
Posted by David Mills RCN America Network Sports at 9:51 AM