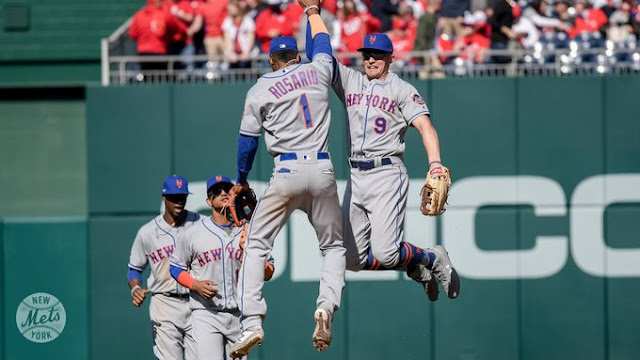 Photo recap below courtesy of New York Mets and Anthony DiComo
WASHINGTON -- The idea was to bring a dose of ultra-professionalism to the Mets’ lineup, and who better than Robinson Canó? One of the game’s best players for a decade and a half running, Cano was on something approaching a Hall of Fame arc before joining the Mets via a seven-player trade this winter. His charge? To lead a team with October aspirations.

As far as first days on the job go, Cano could not have fared much better. The veteran second baseman drilled a home run in his first at-bat with his new team, turned a critical third-inning double play and added an insurance RBI single in the eighth, leading the Mets to a 2-0 Opening Day win over the Nationals on Thursday at Nationals Park.

One of the Mets’ primary offseason acquisitions, Cano came to the team in December in the trade
that also brought closer Edwin Diaz from Seattle to New York. Thursday marked Cano’s first game as a National Leaguer after playing 14 seasons for the Yankees and Mariners. He started at second base, batting third.

After Nationals ace Max Scherzer struck out the game’s first two batters, Cano ran the count to 1-1 before smacking an 87-mph changeup over the fence in left-center field. It was Cano’s second career Opening Day home run, making him the 10th player to homer in his first at-bat with the Mets -- and the first since Mike Jacobs hit a pinch-hit three-run home run in his 2005 Major League debut.

Two innings later, Cano’s defense came into play. After Mets starter Jacob deGrom put runners on the corners, Anthony Rendon grounded a ball to third base with one out. Jeff McNeil fielded and threw to second as the lead runner, Victor Robles, broke for home. Realizing he would not have time to throw Rendon out at first base, Cano pivoted and threw flat-footed to home, catching Robles in an inning-ending rundown.

Cano’s work was not yet complete. In the eighth, pinch-hitter Dominic Smith walked and Pete Alonso followed with his first career hit, a single up the middle. That brought up Cano, who delivered a two-out RBI hit to the opposite field to double the Mets’ lead. Given two runs of cushion, Jeurys Familia and Diaz locked down the eighth and ninth, respectively, to run the Mets’ all-time Opening Day record to 38-20, best in Major League history.