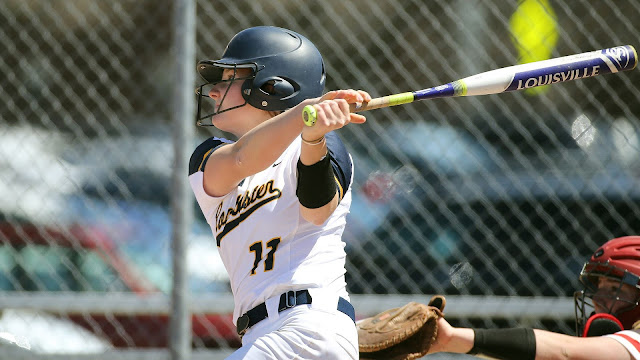 With the game tied at 1-1, Wesleyan's Alicia Ramirez drew a walk with one down in the sixth. She
stole second and moved to third when the ball was thrown away. The Yellowjacket defense came to the forefront with the go-ahead run sitting on third. Yasnei  Llavore tapped the ball to the left side of the mound. Szczerba threw to first. When Ramirez came off the bag rounding third, the ball was thrown across the diamond to get her, then back to first where Llavore was tagged for the third out.

UR scored three times in the top of the seventh. Elizabeth Bourne pinch-hit for Marissa Russo and singled. Russo returned to run for her. Russo stole second, then moved to third when the throw sailed away. Alizah Ayon walked and stole second. Rachael Pletz singled and advanced to second. Russo scored with Ayon reaching third. Alexis Pope walked to load the bases. Jen Carson's groundout got Ayon at the plate. As the ball was thrown around Pletz scored. Pope got to third and scored on a bunt by Toni Anne Hahn.

Game One: Wesleyan 7, Rochester 2:
Two good defensive plays – in a span of three hitters – by the Wolves protected a lead in the fourth inning, just as Rochester was getting ready to draw level.

UR came to bat in the top of the fourth down 5-2. Pletz was hit by a pitch. Pope dropped a bunt down the first base line. The throw to first sailed down the right field line allowing Pletz to race to third and Pope to reach second. That brought Elizabeth Bourne to the plate. She had a run-scoring double in the second inning that got Pope home. This time, she ripped a line drive up the middle that was speared by Wolves pitcher Mackenzie Hooker.

Gianna Melillo pinch-hit for Lydia Petricca, but Hooker retired her on a soft line drive to second base. Harleigh Kaczegowicz came to bat. One inning earlier, she doubled and came around to score on a single by Ayon. Kaczegowicz hit a sinking line drive into right field that was caught – just above the ground – by Savanna Boyette to end the inning.

UR threatened one inning later. With two out, Carson and Hahn singled. Hooker ended it, retiring Pletz on an infield grounder.

Hooker scattered 10 hits, hit one, did not walk anyone, and fanned one. Hannah Leahy took the loss for Rochester. She allowed four hits and five runs (two earned). Bourne relieved in the first. In 5.2 innings, she allowed seven hits, two runs (both earned), walked two, and struck out two.

Rochester is 2-8. Wesleyan is 5-3. The Yellowjackets play on Friday vs. Emory & Henry and Emory University. The home opener is scheduled for Wednesday, March 20 vs. St. John Fisher at Southside Field. It will be breast cancer awareness day – the annual 'Pink' game.

ATLANTA – Rochester dropped a tough 8-7 decision to Emory & Henry on Tuesday afternoon at Emory University in the EU Classic. Emory then posted a 10-1 run-rule victory in the second game of the day.

Th Yellowjackets have a day off on Wednesday. They return to action on Thursday with an evening doubleheader at Wesleyan College of Georgia. Rochester's record stands at 1-7 heading into the Wesleyan twinbill.

Game One: Emory & Henry 8, Rochester 7:
The Wasps scored four runs in the sixth to tie the score (two unearned), then a solo run in the bottom of the seventh to seize the win.


Liz Bourne dominated the middle innings on the mound for Rochester. After giving up an RBI single to Erin Anderson in the bottom of the third, she retired eight straight. She went the distance – 6.1 innings, allowing 12 hits, eight runs (six earned) with no walks, no strikeouts, and no hit batsmen.

The win went to Derr in relief. Over the last four innings, she allowed one hit, two runs (both earned), walked five and struck out five.

Rochester scored three unearned runs in the top of the first. Harleigh Kaczegowicz doubled. Marissa Russo's sac bunt was misplayed and Kaczegowicz scored. Russo reached second, moved to third on a groundout, and scored when the E&J catcher threw the ball away. Gianna Melillo had the third run – a walk, a stolen base, and Hahn's single through the right side.

Emory & Henry scored two in the third on a double by Erin Anderson. That made it 5-3. Derr lost track of the plate in the fifth. She walked two and Alexis Pope bunted for a single to load the bases. Kaczegowicz drew a one-out walk to force home Hahn (6-3). With two down, Derr uncorked a wild pitch that scored Lydia Petricca (7-3).

The Wasps scored four in the sixth to get even. An infield error and two singles loaded the bases with no outs. Bourne induced a popout but Alex Thomas hit a booming double to clear the bases. She moved to third on a passed ball, and scored on a single.

Anna Thomas doubled leading off the seventh. Anderson bunted for a hit to put runners at the corners, then immediately stole second. Leanna Toler hit the gamewinning sac fly to right that ended it.

Game Two: Emory 10, Rochester 1 (5 inns.)
The Eagles jumped ahead early, scoring five runs in the bottom of the first inning on five walks and two singles. They tacked on one run in the second inning and stretched it to the run-rule figure in the fourth. The big hits were back to back triples – the first with the bases loaded, then the second one driving in the first.

Rochester's run came in the third inning. Jessica Conforti walked and was bunted to second. Kaczegowicz walked, as did Russo to load the bases. Ayon flied out to right, scoring Conforti.

While on spring break, the University of Rochester Softball team traveled to Atlanta to take on Emory and Henry College in game 1 of today's double header.

Rochester struggled throughout the game, losing 10-0 in 5 innings. Alizah Ayon had the Yellowjackets' only hit with a double in the 4th inning. Addy Szczerba pitched all 5 innings, allowing 7 hits and 5 of the Wasps' 10 runs.

Game 2 against Emory University went a lot better for UR. Down 1-0 in the top of the 3rd, Ayon ripped a single up the middle to drive in Kathleen Desmond to even the score at one. The Yellowjackets would add on to their lead in the top of the 4th when Toni Anne Hahn blasted a solo shot over the left field wall to give Rochester a 2-1 lead.

The lead would not last long as Emory would tie the game on a sacrifice fly in the bottom half of the inning. The Eagles would add on three more in the bottom of the 5th to make it 5-2. UR would narrow the score down to 5-3 in the top of the 6th when Hahn hit a sac-fly to center to drive in Jen Carson.

Rochester would fall by a final score of 5-3. In the loss, Rochester had four hits in 23 at bats. Pitcher Elizabeth Bourne pitched 6 innings, allowing 8 hits, 5 earned runs and striking out a pair of Eagles.
Posted by David Mills RCN America Network Sports at 6:20 PM