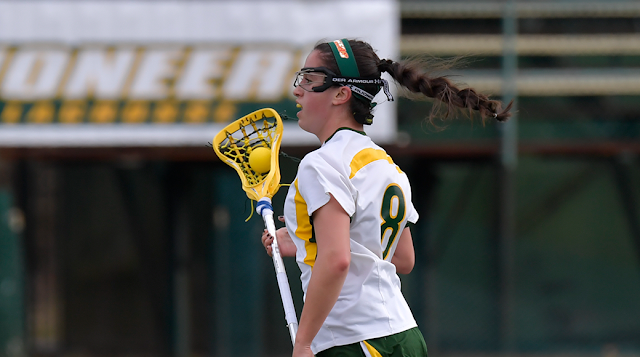 Recap, photo courtesy of LIU's Elliott Carr - Assistant Director of Athletic Media Relations
BROOKVILLE, N.Y. – The No. 6/5 LIU Post women's lacrosse team led early but could not hold on for the win as it suffered its first setback of the season against defending national champion No. 1/1 Le Moyne College 16-7 Saturday at Bethpage Federal Credit Union Stadium.

Junior Alyssa Mallery continued the outstanding start to her 2019 campaign, leading with team in goals with two and draw controls with seven. Senior Trish Brisotti, junior Paige Sherlock, junior Sara Stephens and junior Brianna Feldman each had one goal while freshman Madeline Schaefer scored the first goal of her career. Redshirt senior Carly Spano led the Pioneers in groundballs with two and junior Maddie Titus two caused turnovers were a team-high. Freshman goalkeeper turned away 15 shots, an early career-high.

The Pioneers raced out to a 3-0 lead with 21:14 left in the half after goals from Brisotti, Feldman and Stephens. The Dolphins bounced back and tied the game 3-3 with 11:58 on the clock but Sherlock scored on a free position shot with 9:35 remaining in the half to give LIU Post a 4-3 lead. Le Moyne scored five unanswered goals to end the half and took an 8-4 lead into halftime.