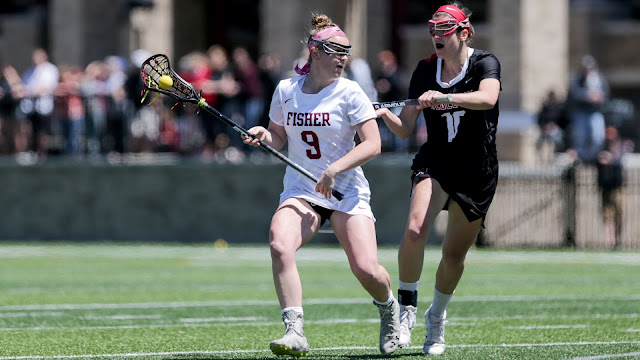 Recap, photo courtesy of St. John Fisher
CLEARWATER, Fla. – The No. 19 St. John Fisher College women's lacrosse team wrapped up its Spring Break trip on Friday morning as the Cardinals defeated King's College 21-3 in non-conference action. With the win, Fisher moves to 2-1 overall on the season Monarchs fall to 1-4 overall in 2019.

As a team Fisher totaled 25 shots on goal throughout the game, while holding Kings to only four. The offense was widespread as 15 different Cardinals found the back of the net in the matchup, with Mary Grace Doyle leading the way with four goals.

Both sides were held scoreless for the next eight minutes of the opening half, until the Monarchs tallied their first goal at the 11:54 mark. Three minutes later Kings found the back of net once again, cutting the Fisher lead to 9-2.

From there, the Cardinals were able to beat the King's goalkeeper three more times before the halftime horn sounded as Doyle, Sydney DeGirolamo, and Alyssa Sabotka pushed the lead to 10 goals at the break.

As the second half got under way, Fisher picked up right where it left off in the first half as goals from Doyle and Marziale increased the lead to 14-2. Over the next 17 minutes of play, the Cardinals would find the back of the net seven more times, before Kings tallied a late goal under the three minute-mark.

Goalkeeper Claudia Mocciaro was credited with her second victory of the season after seeing the first half of action in net and making one save, while Morgan Hayes saw the other 30 minutes of action between the pipes.

The Cardinals return to action next Friday at 4 p.m. when they welcome William Smith College to Growney Stadium for another non-conference matchup.
Posted by David Mills RCN America Network Sports at 7:24 PM