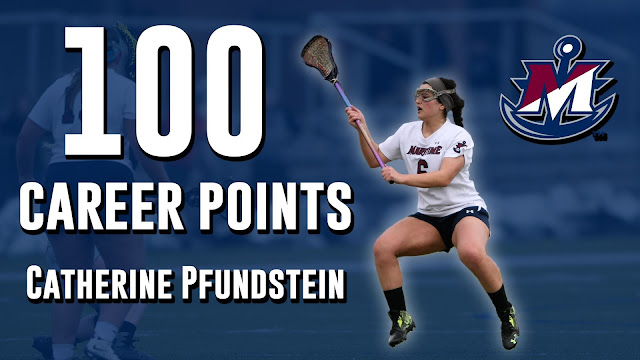 March 13th recap, photo courtesy of SUNY Maritime
The Maritime College women's lacrosse team came out strong in the first half of their home opener against Ramapo College on Wednesday night, but ultimately fell to the Roadrunners 12-9.

Krista Deleva (Sound Beach, N.Y./Miller Place) got things rolling for the Privateers with an unassisted goal just three minutes into the game and Maritime held that 1-0 lead until 21 minutes left in the half where a Ramapo goal tied the game. After both teams traded goals once again, Catherine Pfundstein (Deer Park, N.Y./Deer Park) recorded her 100th career point with a crafty goal in front of the net off a pass from Deleva. Deleva continued to facilitate the Maritime offense as she recorded five consecutive assists in the opening half to help the Privateers take a 7-5 lead into the locker room.

Pfundstein netted four goals in the first half, with three of them coming off a pass from Deleva. Also chipping in first half goals for Maritime were Sara Wright (East Islip, N.Y./East Islip) and Ciara Murphy (Pearl River, N.Y./Pearl River). Wright was also key for Maritime's success on offense as she took an 8-4 advantage in draw controls.

Unfortunately, Maritime's high-powered offense couldn't keep it going in the second half as the Roadrunners limited them to just two goals. Esmeralda Hernandez (Huntington, N.Y./Huntington) and the Privateers defense continued to limit Ramapo's offensive chances, but they were unable to hold onto the slim lead for the remainder of the second half.

Hernandez recorded 11 saves in the loss, but picked up some clutch second half shots to keep Maritime within striking distance. Pfundstein finished with five goals to lead all scorers, while Deleva set a new program record for assists in a game with six. Wright finished with 12 draw controls compared to just 10 from Ramapo, while also causing five turnovers and picking up nine ground balls.

"Obviously we wanted to come out with a win today, but I'm very happy with our first half performance against a tough Ramapo team," said head coach Alyssa Guido. "The team executed our game plan very well to start the game and I think there's a lot that we can build off of from today."
Posted by David Mills RCN America Network Sports at 3:49 PM