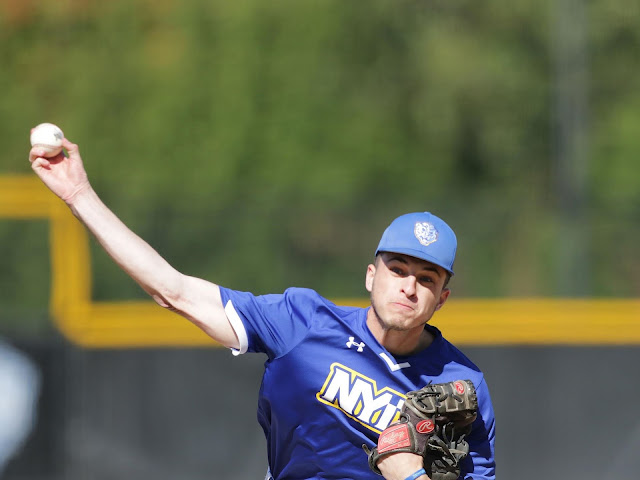 The Bears completed a six-game trip to Florida with a 7-2 win against Minnesota Crookston on Sunday morning at Osceola Heritage Park.

Pitchers Chris Mott, Joseph Murphy and Ariel Taveras combined to limit the Golden Eagles to two runs (one earned) on two hits, albeit while walking six and hitting two batters.

Taveras, who handled the final four outs, earned his third save in a three-day span.

The Bears (7-3) took control with a five-run third inning that included a run-scoring single from EJ Cumbo.

Cumbo and Ryan Kuskowski each finished 2-for-4 with an RBI.

The Bears went .500 during their Florida trip, and certainly ended on a high note.

After getting swept by Gannon in a doubleheader on Thursday, NYIT rebounded by defeating Minnesota Duluth and Minnesota Crookston on Friday. Then, after falling to defending national champion Augustana on Saturday, the Bears closed the trip with a second win against Minnesota Crookston in the finale.

NYIT is due to fly back to Long Island on Sunday night.

The team previously had opened the season with a 4-0 trip to Myrtle Beach, S.C., including wins against regionally ranked Franklin Pierce and Le Moyne.

The Bears now have 10 days to prepare for a rescheduled matchup on March 20 with Adelphi at Angelo Lorenzo Memorial Field to begin the home portion of the 2019 schedule.

"It's great to get a win in our last game here," coach Frank Catalanotto said. "We played some tough teams this trip. It was nice to see the guys battle hard in every game."
Posted by David Mills RCN America Network Sports at 2:30 PM