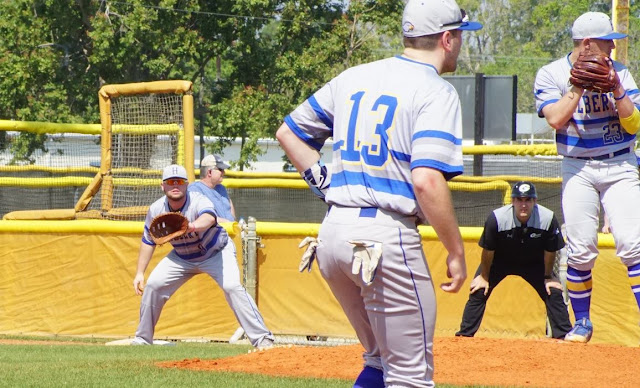 AUBURNDALE, Fla. – The Hilbert College baseball team returned to action this morning after finishing a late-night double header under the lights last night.

The Hawks suffered an 18-6 defeat to SUNY Oneonta in the first game yet rebounded in the night cap.  Hilbert made things interesting with a late game rally but fell just short, 9-8, to the Dragons..

After spotting the Dragons two runs in the bottom of the 1st, Hilbert jumped ahead 5-1 and held that lead until the bottom half of the 3rd inning.

Oneonta connected for 18 runs spaced over their final four innings at the plate.

Oneonta strung together runs behind a 2-RBI triple, an RBI double, and another 2-RBI triple in the 3rd inning to take over the lead, 8-5, by the top of the 4th.

Hilbert scored one final run in the 6th while the Dragons pushed 10 more markers by the bottom of the 6th.

Austin O'Shei earned the only double for Hilbert and Jonathan Wilson and Shaun Wright were each credited with stolen bases.

The Hawks found themselves down by five runs by the time they picked up their bats in the bottom of the 3rd.  Hilbert inched their way back, scoring seven runs through the next three innings but still trailed, 8-7 at the top of the 6th.

Hilbert held Oneonta scoreless in the 6th, but found themselves right back on defense at the top of the 7th after going through only four batters iin the bottom half of the 6th.

Oneonta tacked one more run on and now led by two runs before Hilbert had their last at bats in the 7th.

With one out on the board, Tristan Aldinger doubled down the left field line and advanced to third on a wild pitch.  Shaun Wright's RBI ground out cleared the bags and Hilbert's next batter went down swinging in an attempt to extend play.

Daniel Munn dropped to 1-1 on the mound giving up eight hits and five earned runs through 3.2 innings.  Michael Goodberry closed the game with 2.1 innings of solid pitching, earned the Hawks only strikeout while giving up one hit and one earned run.

Oneonta ran the bases and went 8-for-9 in stolen bases while the Hawks went 3-for-4 with Griffith DeMayo (2) and Treyton delaCuesta making it safely.

Aldinger went 4-for-4, hitting a pair of doubles with one RBI and scored two runs.  James DiSanti scored twice and knocked in delaCuesta off his double in the 4th inning.

Hilbert's double header against Wilson College originally scheduled for March 9th has been canceled so the Hawks (2-7) will travel to the Philadelphia, Pa. area for a single, 9-inning game against Cabrini College Sunday, March 10th.
Posted by David Mills RCN America Network Sports at 10:05 AM