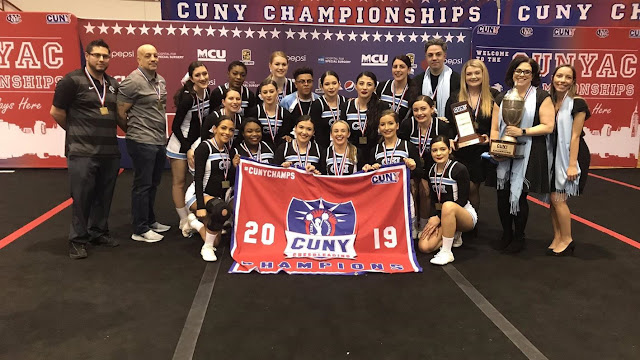 Jamaica, NY - It proved to be a very fruitful night for the College of Staten Island Cheerleading team, as they prevailed over the field at the annual CUNYAC Cheerleading Championships held at York College this evening in front of a large audience.  For the second-straight year the Dolphins dazzled, scoring the most points and winning the CUNYAC Championship for the fourth time in their history, and for the first time ever, in back-to-back fashion.

Performing towards the end of the evening, the Dolphins' routine was sensational, as the team turned tumbles and stunted often during their short routine that they prepared for weeks.  With high-flying acrobatics and a great choreographed set, CSI was able to score more points than their competitors at John Jay College, Lehman College, Brooklyn College and Medgar Evers College.

The Dolphins were led by flyer Alyssa Dunn, who took Most Valuable Performer honors, as she took championship wins in stunting and tumbling individual events as well.