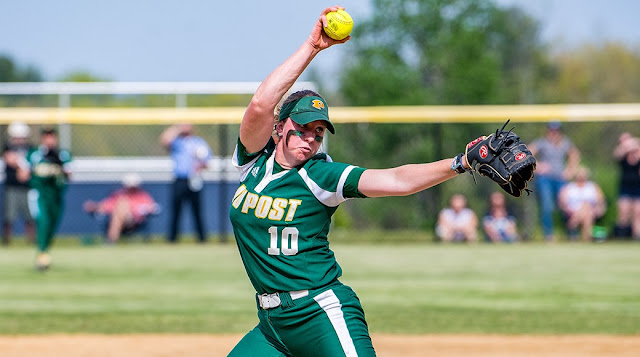 CLERMONT, Fla. – The LIU Post softball team opened its 2019 season with a historic performance in the Sunshine State, splitting a doubleheader series with top-ranked Saint Anselm College at the Osceola Softball Complex on Sunday, March 3. In a rematch of last season's East Super Regional, the Pioneers opened the day with a 1-0 victory in game one before falling by the same final in the second contest.

The win during the opener marked LIU Post's first ever win against a No. 1 ranked opponent in its 44-year history.

Junior Katie Humhej and senior Hannah Olshevski were both outstanding inside the circle during two pitching duels. Humhej struck out seven hitters while scattering six hits for the complete-game shutout, while Olshevski also went the distance, allowing one run on six hits with four strikeouts.

Sophomore Hanna Finkelstein finished 2-for-6 (.333) at the plate as the only Pioneer to collect a pair of hits on the day. Junior Allie Laird scored the only run for LIU Post, while senior Julia Seader plated Laird with an RBI single.

The Pioneers were retired in order to open the game and the Hawks threatened immediately with a leadoff double to left field. Saint Anselm eventually put runners at second and third with two outs in the bottom of the first but Humhej worked out of the jam when she caught Maddison Leite looking to end the frame.

Finkelstein gave the Pioneers their first base runner with an infield single during the top of the second. A line out and a strike out ended the frame however and the Hawks once again led off the bottom of the second with a double to left field to put a runner in scoring position. A Pioneer error advanced the runner to third and a two-out walk loaded the bases for Saint Anselm. Humhej again worked out of the early jam by getting Jordan O'Connor to fly out Laird in left field, keeping the game scoreless.

Senior Leah Mele led off the top of the third by getting hit by a pitch and advanced to second on a sacrifice bunt by Laird for the first scoring opportunity of the afternoon. The Pioneers were unable to capitalize though, as Saint Anselm's Morgan Perry struck out the next two batters to end the frame. The Green and Gold went down in order during its next two plate appearances and Humhej limited the Hawks opportunities and the game entered the sixth inning still scoreless.

Laird led off the top of the sixth with a double to left field and advanced to third base on a sacrifice bunt by junior Ashley Casazza. Seader delivered the clutch hit with a single to left field to score Laird and give the Pioneers the 1-0 advantage. Two strike outs ended the top of the sixth, and Humhej took care of the rest by retiring six of the final seven batters she faced to help the Pioneers hold off the Hawks for the historic victory against the nation's top team.

An error by the Pioneers on the game's first hitter did not prove costly as Olshevski induced a double-play ball to end the top of the first. LIU Post had the game's first scoring opportunity during the bottom of the second when Finkelstein singled to right field and advanced to second base on a Hawk error. Perry kept the Pioneers off the scoreboard though by forcing a ground out and a strikeout to close out the frame.

The Green and Gold put another runner in scoring position again in the bottom of the third, but Courtney Fisher came on in relief in the circle and ended the threat with two ground outs to second base. During the fifth inning, Saint Anselm put runners on first and second to lead off the inning on consecutive singles. A sacrifice bunt advanced both runners into scoring position, but a strikeout gave the Pioneers hope of working out of the jam. It was the Hawks delivering the timely hit this time, however, as Shannon Colson singled to left field to score the game's only run.

Sophomore Patricia Dun looked to respond for LIU Post when she led off the bottom of the inning with an infield single and moved into scoring position on a sacrifice bunt by junior Megan Sneeden. Fisher again ended the threat though with two ground outs and retired the side in order during the final two frames to help Saint Anselm salvage a split with the Pioneers.

LIU Post returns to the diamond tomorrow morning when they take on Assumption College and Ashland University at the Legends Way Ballfields at 11:15 a.m. and 1:45 p.m.
Posted by David Mills RCN America Network Sports at 4:30 PM