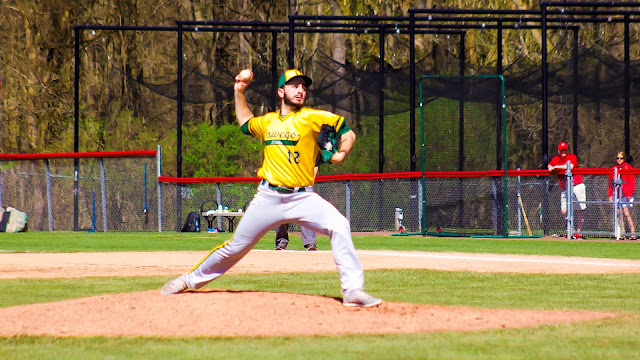 DOVER, Del. – The nationally-ranked Oswego State baseball team picked up its first victory of the 2019 campaign convincingly at Wesley College on Sunday afternoon. Oswego used nine pitchers over the seven-inning game, which was shortened from nine due to the 10-run rule. The Lakers held the Wolverines to just two hits over the seven frames.

HOW IT HAPPENED
Matt Bowman earned the victory in the start, throwing a perfect two frames with three strikeouts, one of which was looking.
Ronald Loomis, Anthony Van Fossen, Ben Wilcox, Ben Geiger, Nick Antonello and Jake Terrill combined to throw four innings, holding Welsey hitless in the quartet of frames while surrendering two unearned runs.
Matt Zakala and Erik Dusseldorp threw the other inning for the Lakers, allowing one run and one hit apiece while both fanning a Wolverine batter.
Oswego hit well, batting better than .300 in the following situations: with two outs (4-for-12), with runners in scoring position (7-for-19) and with the bases loaded (1-for-3).
Jake Walsh and Lukas Olsson both paced the Lakers with two hits apiece while Mike Delicarri racked up four RBI. The senior's four RBI were broken down to two on a triple, one on a sacrifice fly and one on a free pass to first base. Delicarri also scored twice.
Also having multiple-RBI outings were Brandon Nicholson, Justin Troelstra, Ryan Enos and Olsson. All four of those Lakers crossed the plate twice as well.
Rocco Leone, Paul Tammaro and Matt Deblasio each scored twice too.
Rounding out the Lakers with hits were Luke Simmons, Casey Gruarin, Troelstra and Nicholson, all finish with one.

Oswego will continue its road trip next weekend as it travels south to Pennsylvania to face Arcadia University and Neumann University on Friday and Saturday, respectively. The Arcadia game is slated to begin at 3:30 p.m.
Posted by David Mills RCN America Network Sports at 6:23 PM