No. 9 Coe Tosses No-Hitter But Softball Rebounds For 3-2 Win Over Grove City 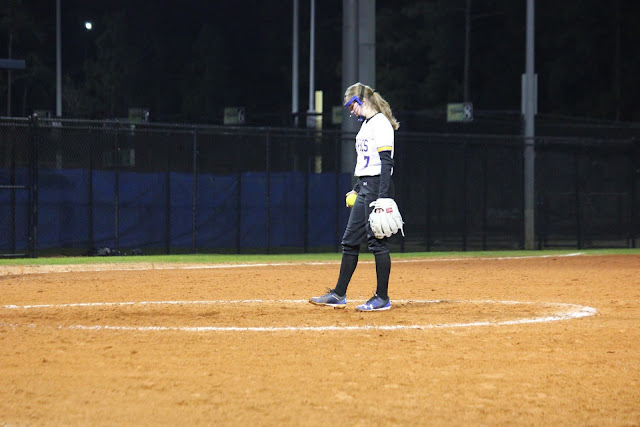 MYRTLE BEACH, S.C. – The Hawks softball team took the diamond again at the City of North Myrtle Beach Park and Sports Complex for another set of non-conference games.

Hilbert dropped a 9-0 game to No. 9 Coe College (9-0) at the start of the day and turned three double plays on defense to garner a 3-2 victory over Grove City College in the 2pm game.

Rookie Kaitlyn Barone got her first taste pitching against a national ranked team and that moved saved Marisa McIntyre for the nightcap against the Wolverines.

Hilbert got nothing off Bailey Smith, the Kohawks ace who threw a no-hitter.  She struck out seven and walked only one Hawk.

Coe poured on the offense at the start of the game (5 runs) and again in the fourth when they scored 4 more runs.

Barone struck one out, walked a pair, gave up 13 hits, and eight earned runs through four innings.

Hilbert earned seven hits, and scored three runs but left 10 runners on the bags in the nightcap.

McIntyre limited the Wolverines to just two hits, but those hits forced a nail-biter until the bottom of the 7th inning when she sent all three batters back to the dugout insuring her second victory in the circle.

Maia Delaney scored two runs in a 2-for-4 performance at the plate and McIntyre went the distance knocking down four batters while walking three others.

Morgan McNeill opened the 4th with a triple to center field and Morgan Grosch's RBI single put the Hawks on the board first.

Delaney doubled to left field at the top of the 5th and knotted the game (2-2) just before Melanie Basile triple to right field.

The Hawks shut down Grove City with back-to-back  inning ending double plays in the 4th and 5th.

After a scoreless sixth inning, Delaney singled to right field and was pushed home by Victoria Grayson's game winning single to center.

Hilbert had a chance to add more runs on the board, but a pitching change by the Wolverines got them out of a bases loaded situation in the 7th.

Hilbert returns to action March 7 (today) with a 9:30 am game against Anna Maria College before they tangle with the NAIA University of Michigan-Dearborn Wolverines.

Be sure to stay up-to-date on all your Hilbert Hawk scores and awards by following @HilbertAthletic on Twitter and by liking the "Hilbert College Athletics" Facebook page.  Additionally, fans of the Hawks who have an Apple device can receive push notification from the newly created Hilbert College Hawks iOS SIDEARM mobile App which can be found in the Apple Store and ITunes.
Posted by David Mills RCN America Network Sports at 12:00 PM