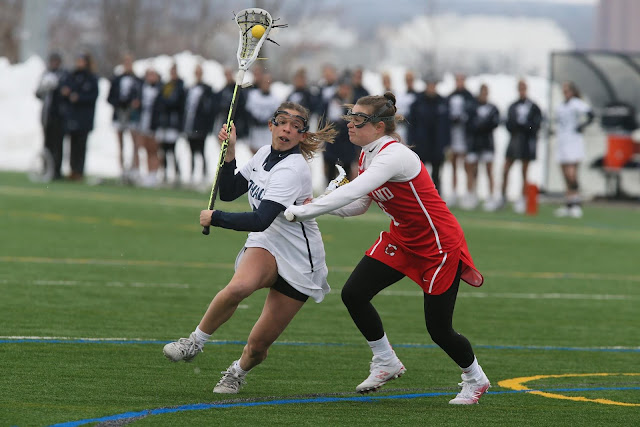 ITHACA, N.Y. – The 18th-ranked Ithaca College women's lacrosse team had the schedule ramp up in a big way on Saturday afternoon when local rival No. 15 SUNY Cortland invaded a snow-swept Higgins Stadium for the Bombers' 2019 home opener. Although the nationally-ranked battled certainly lived up to its billing, it was the Red Dragons that would come away victorious for the second consecutive year, pulling away down the stretch in an 11-8 final. The loss drops Ithaca's record to 1-1 on the season.

The difference in the contest came during the final stretch, as Cortland had the final say in a back-and-forth contest that saw both teams put together surges of controlling play. With Ithaca leading 8-7 after sophomore midfielder Jacqui Hallack's second goal of the afternoon with 14:31 remaining, the visitors enjoyed all the scoring through the remainder of regulation. The Red Dragons put up four goals down the game's final stretch to score the huge early season non-league victory.

Four Bombers had multi-point outings on the afternoon. Sophomore Jacqui Hallack and sophomore
transfer Megan Motkowski paced the team with two goals apiece, while senior attacker Danika Wagener and junior attacker Bailey Herr each recorded a goal and an assist in the contest. Adding points on the day were senior attacker Elizabeth Rice and junior midfielder Katie Welch who each posted one goal. Senior attacker Allie Panara rounded out the scoring with one point on an assist, while also adding a team-best six draw controls.

In goal, Mackenzie Schade suffered her first career loss in her second collegiate start. She finished with six saves on the afternoon.

Playing on home turf for the first time this season, IC clearly came out with the higher energy level in the early moments of the contest. IC dominated much of the early possession in the contest, racing out to a 3-0 lead through the midway point of the opening half.

Wagener got the scoring going less than a minute in when she synced up with Herr on a nice passing play. Herr, working from her usual spot behind the visitor cage, delivered a perfect pass to Wagener at the net front. The senior corralled the pass and put a quick pop-shot into the bottom left. Hallack added a second goal about seven minutes later, slotting home a hard shap shot inside the left post as she streaked down the right side of the attacking fan. Motkowski capped the early surge with 13:51 remaining in the half, finishing off a slick feed from Wagener for her second goal of the year.

Although Carly Stone got the visitors on the board less than a minute after the Motkowski tally, Herr reestablished the three-goal IC lead. Panara set up the play, hitting Herr with a tight-quarters pass into the scrum in front. Herr used her strength to leverage position and get off a shot that found its way into the lower left.

Cortland began to find its legs towards the end of the half and carved out a foothold in the possession that IC controlled to begin the day. The Red Dragons finished the half on a four-goal run to take a 5-4 lead to the break.

The early portions of the second half featured a pair of traded goals through the opening 10-minutes. Motkowski added her second of the day on a free-position to level the score at 5-5, while Cortland's Hannah Lorenzen put the Red Dragons back up a goal at 6-5 with 21:57 to play.

The Bombers pulled back ahead with a two-goal push in quick succession with just under 20-minutes left. Welch scored the first at 19:45, streaking right down the center, before lasering a snap shot into the upper right corner. Rice put Ithaca ahead 7-6 36-seconds later when she labeled a shot inside the left post.

After Brie Yonge leveled the score again for Cortland with her first of three in the half, Hallack capped the scoring for IC with 14:16 left. The midfielder's second goal was similar to the first, as again she found space inside the far-left post as she streaked down the right side of the attacking zone. Unfortunately, it would not be enough for the Bombers, as Cortland struck for a pair to take a lead, before sealing the game with two more goals late as IC chased an equalizer.

Ithaca returns to action next Sunday, March 10, when it hits the road to face 25th-ranked University of Scranton. Start time is scheduled for 1:00 p.m.