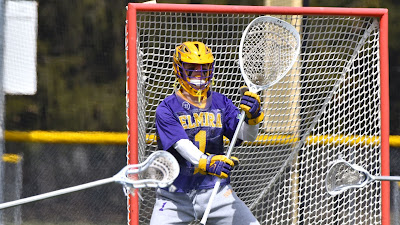 KEUKA PARK, N.Y.  -- An eight-goal second quarter from the Wolves of Keuka College proved to be the difference on Saturday morning, as the Elmira College men's lacrosse team dropped its first contest of the 2019 campaign by a final score of 21-4.

Despite striking first in the opening quarter, EC was unable contain Keuka for long, as the Wolves offense erupted for 11 first-half goals. Keuka ended the contest with 39 shots on goal and  24 face-off wins as the Wolves limited the Soaring Eagles offensive possessions.

The Purple and Gold struggled to slow down Keuka's offense throughout the contest, as the Wolves duo of Jacob Rogowski and Chris Bellanca,  frustrated Elmira's defense with four goals apiece. Elmira's attack was led by rookie Sam Shaw '22, who netted four goals in his first collegiate appearance. Jacob Mattice '21 made 13 saves in 30 minutes of action, while Matt Marchal '19 added five stops in 30 minutes.

Shaw got EC on the board early, as the Portland, Maine, native tallied his first collegiate goal with 12:42 on the clock in the opening quarter. Despite the early goal, the Wolves responded with 11-unanswered goals across the first and second quarters to head into the second half with an 11-1 lead.

The barrage was halted by Shaw in the third quarter, as the rookie received a feed from James Mayer '20 before beating Keuka's Colin Mix for his second goal of the game. Shaw added another goal in the third quarter as he combined with classmate Isaac Gottheil '22 to end a 4-0 run from the Wolves. Shaw added his fourth goal with a little over five minutes to play, but the damage by Keuka had already been done, as the Wolves rode their early lead to the victory.

Up Next
The Soaring Eagles return to action on Saturday, March 9, when they battle Centenary University (NJ) on the road in a 1:00 p.m. matinee.