Geneseo First Half Burst Leads To Win Over UR 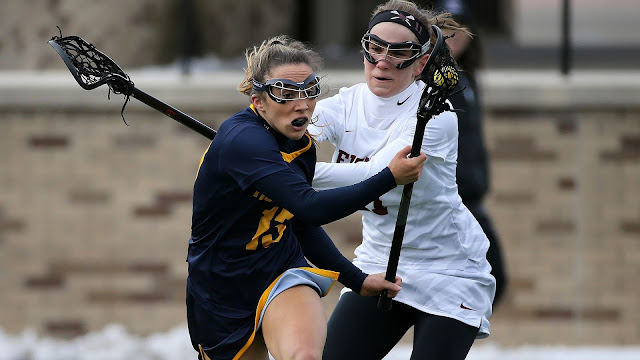 GENESEO, NY – A big scoring burst at the end of the first half boosted host SUNY Geneseo to a 13-5 victory over the University of Rochester women's lacrosse team on Friday afternoon at Geneseo's College Stadium.

The game was originally scheduled to be played Saturday at Rochester's home turf, but expected weather that day forced the adjustment to Geneseo.

The Yellowjackets were led by junior Jamison Seabury who contributed points on four of UR's five goals, scoring three times adding one assist.  The other goals were tallied by Katherine Woo and Kendra Jones.  In goal, Rochester's Carlie Bendavid made 13 saves in the loss.


The teams played even throughout the opening 25 minutes, with the host Knights holding just a slim 3-1 advantage.  UR was able to penetrate the scoring area and generate good scoring chances, including earning free position attempts, but were unable to string goals together.  After a 2-0 Geneseo lead, Seabury streaked in from the left side and fired a rocket past McFadden to cut the lead in half.

After the goal, UR's Mary Panepento earned the draw control and Seabury promptly earned a free position shot, but McFadden made the save.

Geneseo made it 3-1 with 8:47 to play in the half, but Rochester answered with a flurry of chances in the next few minutes.  Those chances included a Maggie McKenna free position attempt which careened off the left post, a Seabury shot that sailed wide and another McKenna shot which went wide.

With 3:55 left in the half, Voci scored her lone goal of the game to make it 4-1 and Geneseo scored four more before intermission to post an 8-1 lead heading to the locker room.

Rochester's Jones scored just a minute into the second half, starting the final 30 minutes strong for the Yellowjackets, but Geneseo was able to force UR without a shot for the next eight minutes, boosting the lead to 10-2 in the process.

Seabury did score on Rochester's next shot, recording a free position goal, with Woo scoring hers from the free position to make the score 10-4 with 15:50 on the clock.  Seabury then scored again, trimming the margin to five, but with only 4:40 remaining in the game, Geneseo was able to hold on for the victory, adding three late goals to reach the final score.

Jenna Macri led UR with four ground balls and caused one of Geneseo's turnovers, while Kaileigh Davis scooped up three ground balls.  Geneseo ended up leading the shot total 37-11 and heled the edge in draws 16-4.

Rochester returns to action on Wednesday afternoon, against Nazareth at 4 pm, with the match being played at Fauver Stadium in the Prince Athletic Complex.