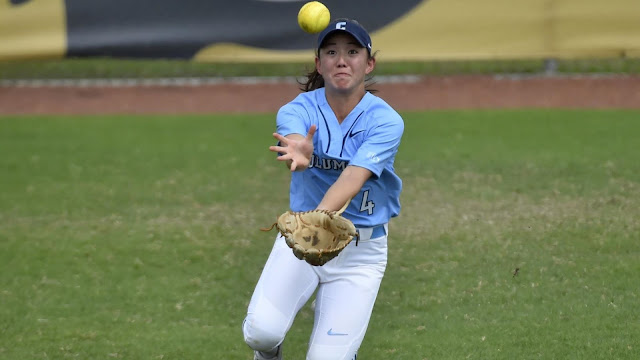 After Columbia (2-7) scored two runs in the top half of the seventh to take a 4-3 lead, Winthrop (8-7) scored two in the bottom half to walk off with the day's first win. East Carolina (10-3) used a five-run second to erase Columbia's two-run first and win the afternoon game.

"We definitely had a better day today," head coach Jennifer Teague said. "We battled at the plate and played better defense. We are focused on our process and focused on getting better every day in all areas."

Junior Sommer Grzybek hit her fifth home run of the season and first of the weekend against Winthrop. She went 2-for-5 at the plate on the day with two RBIs. Senior Alexandra Yule also had a pair of RBIs as part of a two-hit day. Sophomore Maria Pagane was 3-for-8 with a double and three runs scored.

In the circle, junior Erin Gallo allowed just one earned run in 4.1 innings of work against the Eagles. First-year Alexa Pinarski tossed 4.0 innings of one-run ball against East Carolina, relieving sophomore Madeline Meier in the third.

Columbia closes out the weekend Sunday morning when it takes on UMass at 9 a.m. Live stats are available courtesy of ECUpirates.com.

Game 1 Recap: Winthrop 5 – Columbia 4
Columbia rallied for two runs in the seventh to take a one-run lead against Winthrop, but the Eagles got them both back in the bottom half and walked off victorious, 5-4.

Trailing, 3-2, entering the seventh, Columbia started its rally with a leadoff single by Maria Pagane. First-year Hailey Wetherill successfully sacrificed her to second before both Max Ortega and Sommer Grzybek reached to load the bases with one out. First-year Abby Stuart fell behind 0-2 before working a walk to tie the game. After a pitching change, senior Alexandra Yule hit a ball deep enough to right that allowed Ortega to score from third and put the Lions ahead.

Erin Gallo took the circle for her sixth inning of work after relieving starter Madison Canby in the second. The first two batters she faced both reached base and head coach Jennifer Teague made the decision to go to the bullpen for Alexa Pinarski. The rookie got ahead 1-2 on Taylor Charlton before the Winthrop sophomore hit a single to center to tie the game. However, the Lions committed an error on the play, allowing Keleigh Romine to score the winning run all the way from first.

Sommer Grzybek reached base four times, finishing the game 2-for-2 at the plate with a run, an RBI and two walks. She launched her Ivy League-leading fifth home run of the season in the third to cut Winthrop's lead to 3-2.

Yule was 1-for-3 at the plate with two RBIs. The senior hustled down the line for a two-out infield single with the bases loaded to drive in the first run of the day. Her sac fly in the seventh put the Lions back on top. Maria Pagane was 2-for-4 with two runs.

Game 2 Recap: East Carolina 6 – Columbia 2
East Carolina scored five runs off Columbia starter Madeline Meier in the second inning, which was enough to carry the Pirates the rest of the way, 6-2, in the Lions' second game of the day.

Columbia jumped out to a first-inning lead for the second game in a row. Maria Pagane and Hailey Wetherill led off the game with back-to-back singles and were advanced into scoring position on a sac bunt by Max Ortega. A wild pitch by ECU starter Whitney Sanford brought in Pagane. Later in the at-bat, Grzybek grounded out to second but drove in Wetherill in the process, putting the Lions ahead, 2-0.

Meier worked around two walks and a single in the first thanks in part to All-Ivy catcher Amanda Nishihira throwing out her fifth runner of the season. However, ECU scored five runs on four hits in the second. Faith Jarvis tripled in Abigail Umphlett, who led off the inning with a walk, and Kendra Ziemba doubled three pitches later to put the home team ahead, 2-0. After a one-out single made it 3-0, Rachel McCollum capped off the inning with a two-out, two-run double down the right field line.

Pinarski relieved Meier after the Pirates led off the third with a double. The rookie went the rest of the way, surrendering just one run on a wild pitch in the sixth while striking out two.

Sanford tossed a complete game for ECU. Columbia put runners on the corners with two down in the fifth against Sanford but she got Grzybek to strike out swinging to end the threat. The Lions managed six hits in the game. Wetherill led the offense by going 2-for-4 at the plate with a run.