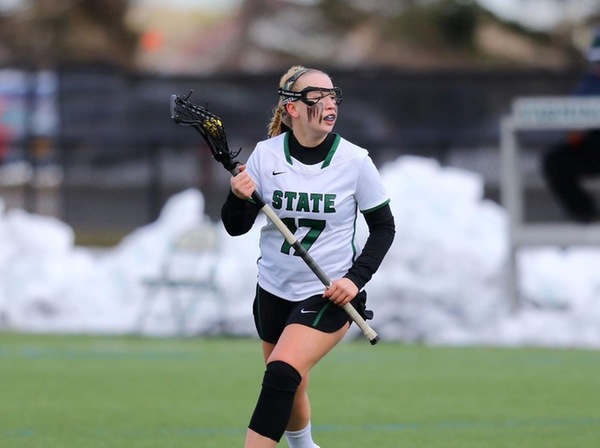 Oneonta, N.Y. - The Farmingdale State women's lacrosse team traveled to SUNY Oneonta this afternoon for a non-conference game and lost, 17-6. The Rams fell to 0-2, while the Red Dragons earned their first win of the season and are 1-1.

Oneonta started quickly as they scored three times in the first 2:13 of the game. After FSC sophomore midfielder Danielle Hall (Levittown, N.Y.) scored off the feed from senior attack Jessica Spina (Lindenhurst, N.Y.) to cut the deficit to two, the Red Dragons recorded three unanswered goals to go in front, 6-1.

With 21:12 left in the first half, Farmingdale State junior midfielder Courtney Gendels (Wantagh, N.Y.) notched an unassisted goal to close within four at 6-2, but Oneonta senior attack Kelsey Cohen (Baldwin, N.Y.) produced the game's next two scores to take an 8-2 advantage.

Trailing 10-3, Genedels registered her third goal of the game from sophomore midfielder Haley Perez (Smithtown, N.Y.) to cut the deficit to six.

The Red Dragons led 11-4 at the halftime break and opened the second with three straight goals from sophomore attack Sophia Calabrese (Bethlehem, N.Y.) to take a commanding 14-4 advantage. Oneonta held FSC to just two goals the rest of the way as they went on for the 17-6 non-conference victory.