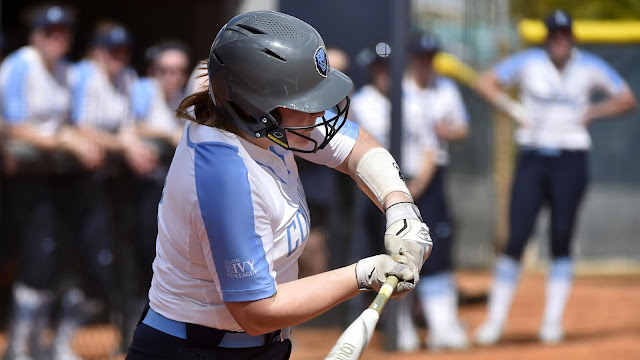 GREENVILLE, N.C. — A nine-run third was too much for the Columbia softball team to overcome, as the Lions ended their five-game weekend at the Purple & Gold Invitational with a five-inning loss to UMass, 10-2, Sunday morning. The tournament was hosted by East Carolina.

Columbia (2-8) posted six hits on the day. First-year Abby Stuart drove in one of the two runs with her second long ball of the campaign. Max Ortega went 1-for-2 with an RBI single in the third and Amanda Nishihira was 1-for-2 with a run scored.

Rookie right hander Alexa Pinarski (1-2) got the start in the circle and was charged with six runs on five hits and five walks in 2.1 innings. Monique Benjamin retired all five batters she faced in her collegiate debut.

"We played better competition this weekend and the biggest thing for us is to continue to work," head coach Jennifer Teague said. "We have to allow ourselves to fail instead of trying to be too perfect, and then we need to get better through our failures. We have a week off now to clean up some things and focus a little bit. If we get our minds right we'll be okay."

Quinn Breidenbach (3-2) picked up the win for UMass (8-7). The starter allowed two runs on six hits across 4.0 innings. Kenadee Rausch finished off the game with a 1-2-3 fifth.

UMass got on the board in its turn at bat, scoring on a double-steal attempt with runners at the corners and one out. The Lions committed an error on the throw down to second, allowing Riley Gregoire to score from third. Pinarski walked two and allowed two hits in the inning but was able to get Danielle Ellis to fly out with the bases loaded to limited the Minutewomen to a single run.

UMass blew the game open in the third. Three straight batters reached base to load the bases with one out before Danielle Ellis and Jackie Kelley provided back-to-back RBI singles to left, driving in three to make it a 4-0 game. The Lions went to the bullpen for Madeline Meier, but UMass's onslaught continued. Ten straight Minutewomen reached base as part of a nine-run inning before all was said and done. Pagane turned a double play at short to put an end to it with UMass leading 10-0.

Columbia got one of those runs back in the fourth. Amanda Nishihira singled to left to lead things off and Maria Pagane dropped down a bunt single with one down to put two Lions on base. After Wetherill lined out to left, Max Ortega continued her impressive start to 2019 with by driving in her fifth run of the year. Pagane tried to go first-to-third on the play but was thrown out to retire the side.

Monique Benjamin made her collegiate debut in the circle after Meier surrendered a one-out walk in the fourth. The rookie struck out the first batter she faced and got out of the inning without allowing a run. Benjamin went on to toss a 1-2-3 fifth and retired all five batters she faced.

Abby Stuart put up the second Columbia run of the day with a one-out home run to center in the bottom half of the fourth. The blast was her second of the season and cut the UMass lead to 10-2. Alexandra Yule followed with her first extra-base hit of the season, doubling to left center, and Jordan Townsend made it three straight hits on a single through the left side. Townsend made the turn for second as UMass threw home to prevent pinch-runner Genny Soltesz from scoring, but was thrown out trying to advance. Breidenbach escaped the jam by getting Nishihira to pop out.

Kenadee Rausch entered the circle for UMass in the fifth and retired the Lions on six pitches to end the game in five innings.

Columbia has a 12-day layoff between games before it heads to Florida for seven games over Spring Break. The Lions are scheduled for five games at the USF-Michele Smith Pediatric Cancer Spring Invitational (March 15-17). They will remain in the Sunshine State for a single game the following Tuesday against Lafayette and conclude their trip Wednesday with a single at Florida Gulf Coast.