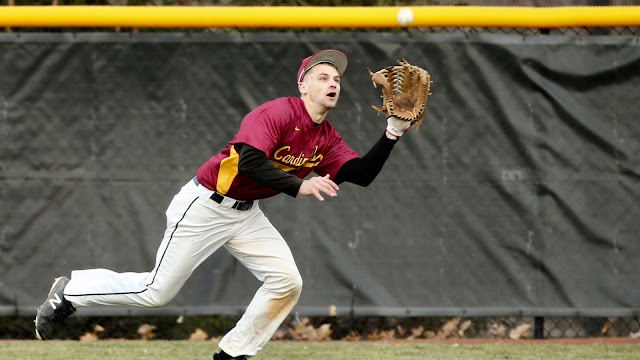 WINTER HAVEN, Fla. – The St. John Fisher College baseball team dropped both ends of a non-conference doubleheader to Baldwin Wallace on Saturday as the Cardinals, who are receiving votes in the latest D3baseball.com national poll, kicked off their schedule in the RussMatt Central Florida Invitational at Bing Tyus Yard.  With the defeats, Fisher slipped to 1-2 on the season while the Yellowjackets, who are also receiving votes in the same poll, evened their season mark at 2-2.

The Yellowjackets were able to plate a pair in the top of the first inning after loading the bases before an out had been recorded.  Following a pitching change, Jack Delaney was able to induce a groundout to keep the game at 2-0 before an inning-ending double play allowed the Cardinals to escape the jam.

After retiring the side in order in the home half of the first, Baldwin Wallace struck again with four runs in the top of the second with the big blow coming in the form of a three-run bases-clearing double that made it 6-0.

The Yellowjackets would tack on two more runs in the top of the sixth before Justin Graham delivered Fisher its first hit in the bottom of the frame with a one-out triple down the right field line.  Following a walk to Jack Kelleher, Allen Murphy got Fisher on the board with a single to left that made it 8-1 heading to the seventh.

In the final inning, Baldwin Wallace was able to tag Fisher for one more before closing out the game in the bottom of the inning for a 9-1 win.

Jake Hewitt (0-1) took the ball to start and was saddled with the loss after allowing two runs in the first. Delaney allowed four runs in two innings of work before being lifted for Kenneth Westbrook who threw four innings and yielded two runs on three hits to go along with two strikeouts.  Senior Jim Dawson made his first appearance on the mound since 2017 and was tagged for one run on two hits over an inning of work.

In the second game, it would be Fisher that struck first as the Cardinals plated a pair of runs in the top of first on three hits.  Graham led off the inning with a single to second and moved into scoring position after swiping second.  Pasquale drew a walk to keep the momentum going before Murphy crushed a two-run double to left to make it 2-0 in Fisher's favor.

Baldwin Wallace would get both runs back in the bottom of the second and opened up a one-run lead in the third inning after back-to-back doubles made it a 3-2 game.

After an unearned run in the bottom of the fifth made it 4-2, the Yellowjackets added to their lead in the sixth with two consecutive singles followed by an RBI-groundout to take a three-run edge into the top of the seventh.
Trailing by three runs with three outs left in play, the Cardinals were unable to get anything going in the top of the seventh as the Yellowjackets took game two, 5-2.

In all, Fisher had six hits in the game with Graham, Murphy, Ryan Simmons, Michael Beimel, Antony Mantova and Mitchell Rosati each collecting one hit.

The Cardinals will return to the diamond at 4:30 p.m. on Sunday when they take on Illinois College in Kissimmee, Fla.
Posted by David Mills RCN America Network Sports at 1:10 PM