Raptors cruise to victory in 2019 opener 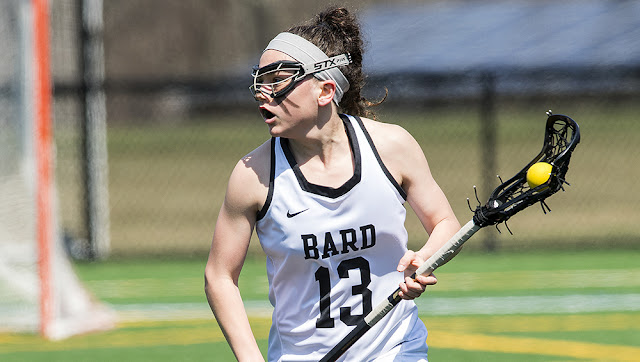 The Raptors got six goals from six different players in less than six minutes to open the game, and rolled to a 20-1 victory over Mitchell College in the first meeting between the schools. It was the largest margin of victory in the history of the program.

Glass knows the kind of competition the Liberty League offers, so his reaction was tempered, but he appeared pleased with the result.

Freshman Emma Heffron opened her collegiate career with an unassisted goal just over two minutes into the game; Casey Witte scored 23 seconds later, and Caleigh DeCaprio scored 33 seconds after Witte. Goals by Rachel Yoder, Melissa Rosenthal and Nicole Ellin made it 6-0 with 24:22 left in the first half.

The rout was on. It was 9-0 before Lindsey Fairbank (Newington, CT) scored for Mitchell, and it was 14-1 at halftime.

In the end, nine players scored for Bard, led by Rosenthal, who had four goals and an assist, four draw controls and a pair of caused turnovers. DeCaprio and Heffron each produced three goals and an assist, Yoder, Witte, Ellin and Gillian Adkins each scored twice, while Dylan McDonald and Alliyah Williams added single goals.

Yoder led the Raptors with eight draw controls, McDonald had seven ground balls, and Adkins caused four turnovers. Izabel Kickner made one save.

Mitchell goalie Gillian MacLellan made 14 saves for the Mariners, who are 0-1.

Bard (1-0) was scheduled to host Old Westbury on Saturday, but weather concerns have prompted a postponement. Reschedule dates are being considered.