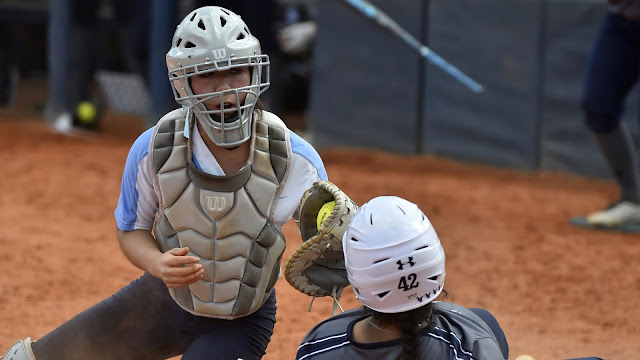 GREENVILLE, N.C. — The Columbia softball team was kept off the scoreboard in its first two games at East Carolina's Purple & Gold Invitational, falling to UMass, 5-0, Friday morning before being defeated by the tournament host, 11-0 (5), in the afternoon.

Columbia (2-5) was limited to three hits on the day. The Lions broke up a no-hitter with two hits in the sixth inning against UMass (5-7) and managed just a second-inning double from Sommer Grzybek against East Carolina (9-3).

The Lions will look to turn it around on Saturday when they take on Winthrop at 10 a.m. before a rematch against East Carolina at 3 p.m.

Game 1 Recap: UMass 5 – Columbia 0
Columbia broke up UMass's no-hitter in the last two innings, but that was all the offense the Lions could muster as the MInutewomen took the opener of the Purple & Gold Invitational, 5-0.

UMass sophomore Kiara Oliver took a no-hitter into the sixth. The first Lion to earn a hit against her was senior Krystin Wong, who singled to right with two down. Sophomore Maria Pagane followed with another single to put runners at the corners for pinch-hitter Alexa Pinarski, but she grounded out to end the scoring threat.

Oliver (2-4) went on to take the win, allowing just the two hits in 6.0 innings. She was relieved by Quinn Breidenbach in the seventh, who retired the side in order.

Madison Canby (1-3) was charged with five runs, four earned, in 4.0 innings. She stranded the bases loaded after allowing the first run to come across in the third. An error led to an unearned run in the fourth. Canby began the fifth inning but was taken out in favor of Erin Gallo after the first two Minutewomen reached base. Gallo allowed both inherited runners to score before getting out of the inning.

Kaitlyn Stavinoha finished the game 3-for-4 with two RBIs for UMass.

Columbia's one hit was a leadoff double off the bat of reigning Ivy League Player of the Week Sommer Grzybek in the second inning. ECU starter Erin Poepping retired the other 12 Lions she faced before sophomore Liv Garman closed out the game with a 1-2-3 fifth.

First-year Alexa Pinarski was charged with seven earned runs in 1.1 innings. Tate McClellan started the scoring with a three-run homer before Pinarski was able to record an out. She escaped the first with no further damage done, but the first four Pirates all reached base in the second and Rachel McCollum blew the game open with a two-run double.

Sophomore Madeline Meier relieved Pinarski and allowed just one of the two inherited runners to score. ECU used two Columbia errors to its advantage in the third, striking for four more runs on four hits. Only one of the four runs was earned.

Tyler King and Logan Wood each went 3-for-3 at the dish for East Carolina. Wood and McClellan drove in three runs apiece.
Posted by David Mills RCN America Network Sports at 6:20 PM