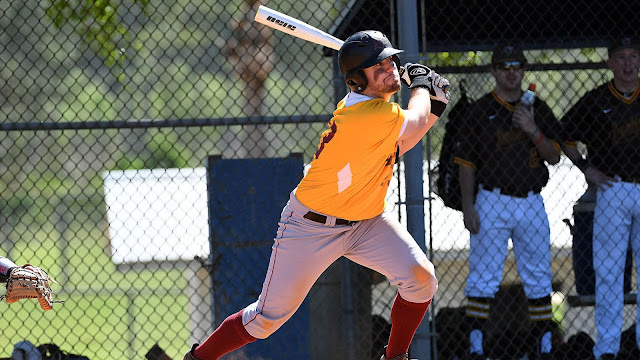 AUBURNDALE, Fla. – The St. John Fisher College baseball team exploded for 15 runs and put together a season-high 21 hits as the Cardinals defeated John Carroll University, 15-9, on Tuesday afternoon at Lake Myrtle Sports Complex as part of the RussMatt Central Florida Invitational.  With the win, Fisher, which has come out on top in three straight games, improved to 4-2 while the Blue Streaks fell to 5-2 on the season.

Anthony Brophy made his first start of the season and went three innings where the junior lefty allowed five runs (four earned) on seven hits.  Kenneth Westbrook earned the win in relief as the freshman allowed three runs in 2.2 innings to go along with one strikeout.  Tim Geissel fanned a pair and earned his second save of the season after the sophomore allowed one unearned run over 3.1 innings.

Allen Murphy, who notched the walk-off hit in Monday's win, went 4-for-6 at the dish with two RBI and a pair of runs scored.  Antony Mantova was 3-for-6 with a team-high three RBI while freshman Jack Kelleher had three hits in five at-bats.  Michael Beimel was 2-for-5 with an RBI and three runs scored while Thomas Pasquale scored three runs and came away with two hits.  Ryan Simmons was 2-for-4 and drove in a pair of runs while Stephen Edgett had two doubles.

After surrendering two runs in the first inning, Fisher got on the board in the top of the second as Simmons and Kelleher each drove in a run to knot things up at 2-2.

Fisher struck again in the third with two more runs on three hits.  Following a groundout to start the inning, Pasquale worked his way on base with a single to left before moving into scoring position when Murphy reached on an error.  With two on and one away, Mantova pushed a run across home plate with a single before Simmons followed suit with an RBI-single of his own to make it 4-2.

The Blue Streaks answered in the home half of the third with three runs, but were unable to hold the Cardinals at bay as Fisher exploded for four more runs on six hits in the top of the fourth.  Edgett started the inning with a double as the Cardinals lined six consecutive hits including a two-run single from Mantova to open up an 8-5 cushion.

The Cardinals continued to rake in the fifth with three more runs – two of which came on balks with the bases loaded.

John Carroll would get cut it to a two-run game in the eighth inning, but once again was unable to get off the field as Fisher plated four more runs in the top of the ninth to blow the game wide open.
Posted by David Mills RCN America Network Sports at 6:29 PM