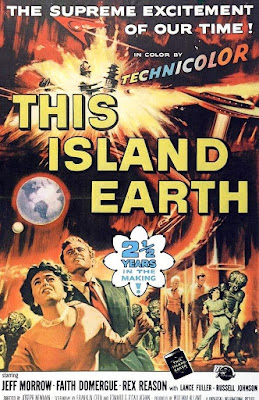 Starring Jeff Morrow and Faith Domergue
This Island Earth is based on the 1938 story "The Alien Machine" by Raymond F Jones. Intelligently directed by Joseph Newman and tautly written by Franklin Coen and Edward G. O'Callaghan, this well-crafted pic was considered by many critics as one of the best sci-fi films of the 1950s. It deserves respect for looking so good in its three-strip Technicolor format, for not going the cheesy route as many other movies did, and for making valid subtle, yet pointed, comments about the Manhattan Project (something few if any sci-fi films dared to do at the time). Though inevitably dated, it was a tremendous box office success and has remained a geek cult favorite. (From a review by Dennis Schwartz, Ozus’ World Movie Reviews)
Future Films
Thursday, 9 May: Destry Rides Again (1939) Western-themed comedy, with Jimmy Stewart and Marlene Dietrich. Directed by George Marshall (The Blue Dahlia, Perils Of Pauline).
Thursday, 13 June: Show People (1928) A silent comedy about making it in Hollywood, with Marion Davies, directed by King Vidor.
Thursday, 11 July: I Know Where I’m Going! (1945) British stars Wendy Hiller and Roger Livesey in a charming story set in 1940s Scotland. This is what romantic movies are supposed to be like.