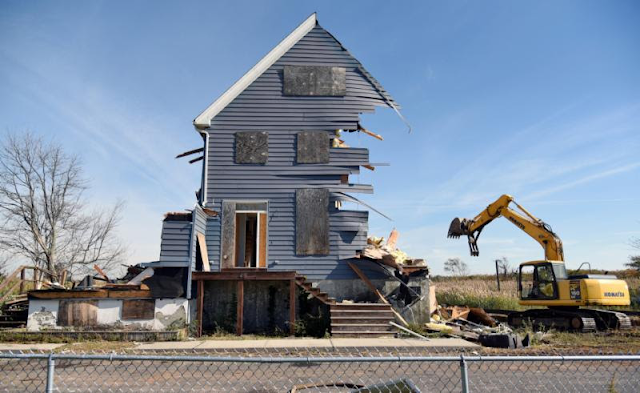 Join us April 27,2019, 3-6 pm at the National Lighthouse Museum when the New York Preservation Archive Project will present the Staten Island premiere of the acclaimed short film Managed Retreat (2018).

By the end of this century, New York City is expected to have up to 6.25 feet of sea level rise, radically reshaping its 520 miles of coastline and impacting more than 100 coastal neighborhoods.

An acclaimed short documentary portrait by director Nathan Kensinger, Managed Retreat examines the fates of three New York City neighborhoods that were purchased by the New York State government in the aftermath of Hurricane Sandy to be demolished and returned to nature as part of the city’s first ‘managed retreat’ from rising sea levels.

This observational documentary follows the process of retreat over the course of one year in three waterfront communities on Staten Island, as homes are destroyed, streets are abandoned, and wild animals begin to return.

Director Nathan Kensinger is a documentary filmmaker, photographer and artist whose work explores hidden urban landscapes, environmental disaster zones, and coastal communities impacted by sea level rise. He will be joined at the Lighthouse Museum by a panel of experts studying the effect of rising sea levels on neighborhoods.

Tickets are $10 and include the price of admission to the Lighthouse Museum, so be sure to explore! The museum is only a 5-minute walk from the St. George Ferry Terminal, and we recommend you enjoy the trip over on the Staten Island Ferry.
Posted by David Mills RCN America Network at 9:18 AM