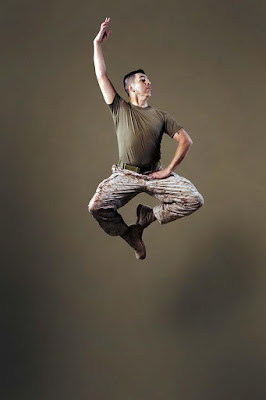 Roman Baca’s Exit 12 Dance Company
At
The Rosendale Theatre Collective
Sunday November 10 th at 2:00 PM
Admission: $12 General - $10 Members &amp; Veterans - $6 12 and under
One percent of our population serves in the military, and an even smaller
number serves in war … &quot;How do we take all of this remote and little understood
experience and inspire the audience to positive action? I want to motivate them to
do something.&quot; Roman Baca

When Roman Baca returned from Iraq in 2007, he was ravaged by depression and
anger. Finally, on the urging of his wife, he founded Exit 12 Dance Company, a
small troupe with a goal of inspiring conversations about the lasting effects of
violence and conflict. Through Exit12, he began to get involved in art and healing
for military veterans. Baca has since choreographed a military-themed
Nutcracker and created an initiative with New York City&#39;s Intrepid Sea, Air &amp;
Space Museum to have Exit12 perform on the aircraft carrier&#39;s deck every
Memorial Day.

At the Rosendale, we will show dance on film performances by Exit 12 plus,
Moved by War a short film about the impact of dance in helping Veterans heal.
Founded in August of 2010, The Rosendale Theatre Collective, a 501(c)(3)
nonprofit organization is dedicated to preserving the historic Rosendale Theatre
and enhancing the cultural life and economic vitality of Rosendale and Ulster
County through film, the performing arts and educational programming.
Posted by David Mills RCN America NY at 9:40 AM