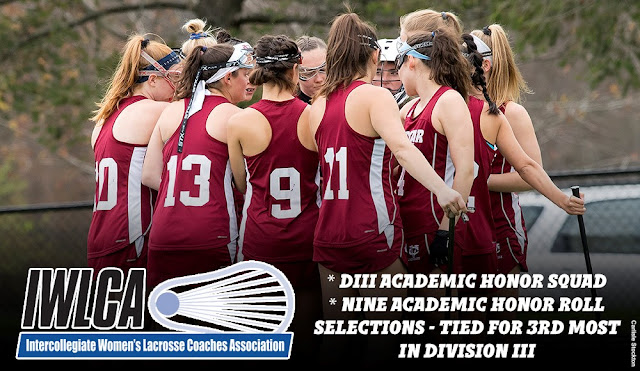 As a team, the Brewers were named to the 2019 IWLCA Zag Sports Academic Honor Squad, posting a team grade point average of 3.70. The Brewers, who were one of 312 schools named across all divisions, have been earning team academic honors from the IWLCA as far back as the 2008-09 season. Vassar owned the top GPA in the nation in 2008-09 and again in 2010-11.

To earn the Academic Honor squad award, team are required to have posted a 3.0 team grade point average for the academic year of 2018-19.

To earn Academic Honor Roll honors, women's lacrosse student-athletes are required to be a junior, senior or graduate student and have earned a cumulative grade point average of 3.50 or greater.

Vassar saw Kristin Caolo, Emily Hamburger, Adele MacEwen, Fiona MacLeod, Sara Mathes, Sydney Nemphos, Gabi Patick, Tessa Waters and Lindsay Wolk all earn the award. Five of the seven seniors were honored for the second consecutive season, and over the last eight seasons VC has had 58 players including 29 over the last three years and 34 since 2015.

During the 2019 campaign, the Brewers posted an 8-8 overall record. Under the direction of 24th-year head coach Judy Finerghty, Vassar had a 5-5 mark in Liberty League play. The squad advanced to the Liberty League Tournament Quarterfinals before falling to Skidmore.
Posted by David Mills RCN America Network Sports at 9:43 AM