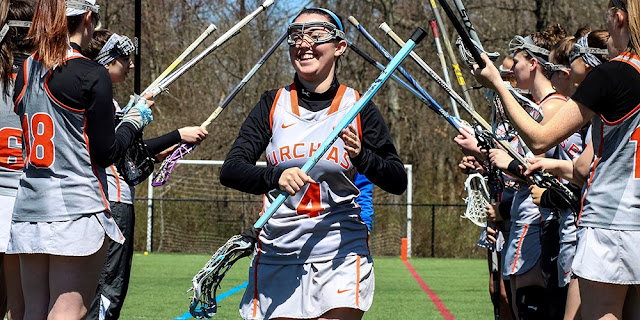 Wilkes raced out to a 10-5 lead at the half and never looked back on way to a 19-9 non-conference victory at Schmidt Stadium.

Camryn Devitt opened the scoring for Wilkes (2-1) off an assist from Domenica Lerch four minutes into the game. Wilkes continued to connect over the next several minutes to take a 5-0 lead over Purchase (0-1) with 20:43 remaining in the half.

Panther junior Astrella Dacosta (Croton, NY) ignited a 3-0 Purchase run with a goal at 17:55. Mecca followed with the first of her four goals at 16:18. Less than a minute later, she found the back of the net again off a helper from freshman Sigrid Cassell (Huntington, NY).

Wilkes fired back with four unanswered goals. Kyra Boccio and Laura Bayzick scored twice each during the stretch.

With less than two minutes remaining in the half, Mecca completed the hat trick performance off an assist from Cassell.

Lerch continued her scoring tear into the second half adding three more goals to push the Wilkes lead to 16-6, its largest of the game, with 14:05 remaining.  Purchase got no closer than seven goals the rest of the way as Lerch, Sierra Duman and Bayzick notched insurance tallies in the final eight minutes of the non-conference win.

Mecca finished with four goals and led all scorers with a career-high 10 draw controls and six ground balls. Castles also recorded a hat trick on the evening with three goals and one assists for four points. Cassell chipped in with a goal and team-best two assists, while Dacosta added one goal and four ground balls.

Junior netminder Brianna Pirozzi (Staten Island, NY) recorded six saves and was tagged with her first loss of the season.

Sarah Carlini finished with 14 saves playing all but ten minutes in net in the game on way to the victory.

Purchase looks to bounce back next Monday (Mar. 11) with its home opener against Southern Vermont College starting at 4 p.m.
Posted by David Mills RCN America Network Sports at 10:15 PM